Follow and support our campaign
#wlwreusablenappies
What's in the packs? Getting Started Practicalities More about the items in the pack

Once you've experienced what it's really like to use washable nappies on your little one, we think you'll be as excited as we are about them and their benefit to the environment!

Dear parents, thank you for your interest in reusable nappies and our trial scheme. Due to the challenging circumstances, we are unable to provide any packs or accept new requests at the moment. However we will start a nappy specific newsletter very soon to provide regular updates on the scheme, promote our live workshops and give additional information to help you get started with reusable nappies. Please leave your email address to be added to this newsletter. If you have any specific questions, feel free to get in touch at any point on info@westlondonwaste.gov.uk

What's in our packs?

Nappies – it’s not just a choice of big brand versus supermarket disposables, there’s actually a whole range of washable nappies out there too. Like all products for babies you have decisions to make, choices that until you’ve experienced using something first hand it’s often hard to decide what’s the best way to spend your money. Unlike choosing a travel system you don’t need to have your washable nappies ready for the day your baby is born, it’s a choice that can wait until you’ve had a while to just watch them sleep, eat and sleep some more (hopefully!). You can borrow our pack at any time from day 1 onwards, when you feel ready.

There are a mix of brands in our packs. Not every brand is represented, nor are many of the patterns/colours of nappy available. We looked at the nappies in other trial packs, asked the experts selling them and finally tried out a range on our babies too.

How do you borrow a kit?

Due to coronavirus pandemic, we are currently unable to give out reusable nappy trial packs to West London parents and carers. We continue to accept requests in the hope that we can provide the trial packs to parents in our area, again soon. Keep an eye on our West London Nappies Facebook page for any updates.

Why are West London Waste so excited about these nappy packs?

If you already have a baby at home you’ll have seen just how many disposable nappies you throw away. With anywhere between 4 and 10 nappy changes a day that’s quite a lot of space in your black bag or bin taken up by nappies, wet wipes and cotton wool each week or fortnight. Putting so many materials in to nappies just to burn them or have them buried in the ground for up to 500 years before they break down doesn’t seem like a good use of all the effort to make them or your hard earned cash to buy them. 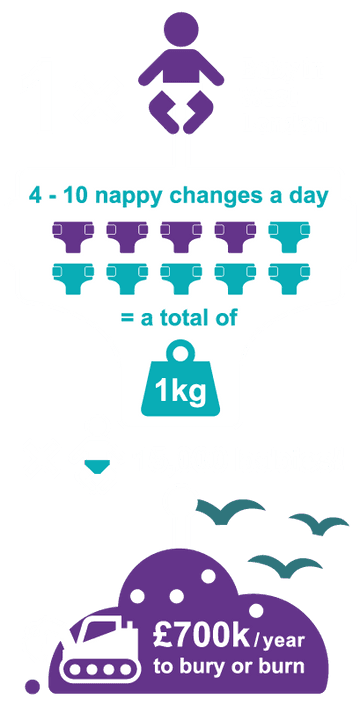 Being concerned about the impact you and your baby have on the environment could be one reason for choosing to give washables a try. The financial cost may also be a big factor. There’s the cost saving for you, which could be £500 for the first child in washable nappies then more than that for any other children. Washable nappies also keep their value well if looked after, you could get most of your money back if you sell them on when you don’t need them anymore.

There were just over 15,500 babies born in west London hospitals in 2014/15. The nappies for each one weigh around 1kg a day so each year that’s almost 5700 tonnes of waste sent for disposal, with a huge price tag of just under £700,000 each year until nappies aren’t needed anymore. Not only will you as a parent spend a lot of money over the years buying those disposables, you’ll be paying again, through your council tax, to dispose of them too.

What's in the packs? Getting Started Practicalities More about the items in the pack
Share this
Haven't found what you were looking for? Try these popular topics...
Recycling Centres Bulky waste collections Fixing Factory